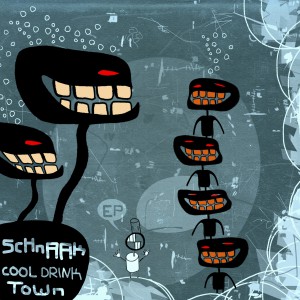 The enormous Berlin-duo SchnAAk opens a new chapter with their kaleidoscopic approach on contemporary pop music: “Cool Drink Town”, an EP recorded in Germany between two tours and completed in Namibia, is here… and it’s good.

While being spread across two continents, SchnAAk successfully continue merging the delightfully bizarre with technical proficiency. After their thunderous math/jazz/noise-jam „women on ships are bad luck“ (2009), weird tour-only formats and most notably their latest acclaimed longplayer „Wake up Colossus“ (2011), which combined the force of a rockband with afrobeat, new music, strangely mutated hiphop and electronica – cast in colorful popsongs: Here they are, yet again, still totally different from their previous incarnations, still very SchnAAkish.

No question, the band still pushes the borders of their own complexity, but at the same time introducing a new adorable simplicity. Here and now, it’s all about patience, the space between the actions: The multidimensional drama that generates itself and its groove calmly.

“Cool Drink Town” is also about the exhaustion of sounds and the assimilation of their instruments, while being moderate, because in case people still haven’t noticed: Mathias Jähnig and Johannes Döpping (who’s playing drums and keys simultaneously on this EP) are playing these tunes with sleazy analogue instruments!

This EP is the start of a series of special outputs by the band. There’s another EP in the pipeline for the end of 2012, which features electronic music (played with instruments): “SchnAAk and the Rundu Choir” – it seems like SchnAAk will be the roof/mothership of an evolving artproject that goes beyond the concept of a band, a style or philosophy. 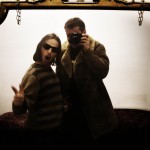